Celebrating something in our house means having a nice dinner and i was running late for my celebration of R's new job when I finally picked Restaurant Andre in Outram Park.

Restaurant Andre dinner is made of 8 courses following a list of 8 key words. 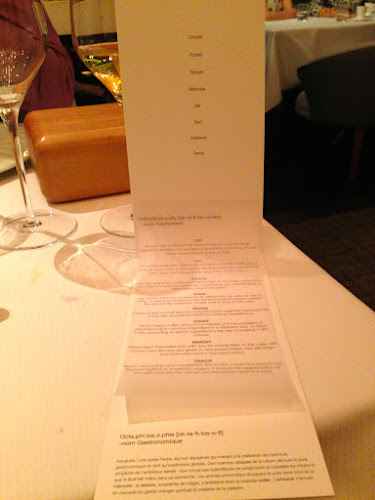 This seafood dominated plate did not use any salt and pepper, flavours were only highlighted by herbs and olive oil.

It was very colorful, I remember the Japanese prawn to be quite fatty, but my strongest memory is about this very flashy green gazpacho style soup in the middle, purely delicious! 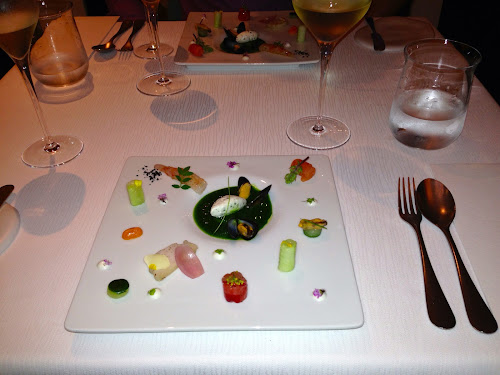 I think it's this dish below, but I can't swear... The connection to salt may have been something about the foam around the apple mousse. Below was an oyster carpaccio and that was great! 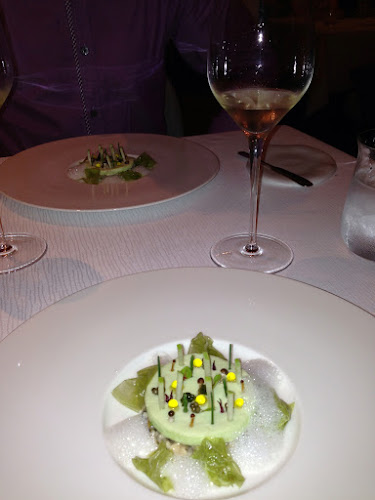 Neither R or I really understood the explanation about this dish but we believe it was duck's tongue (someone, please, tell me that this is eatable? Otherwise I have no idea what it was...)

Anyway, there was salsify (the thing which looks like hay) and roasted sesame seeds.

It was delicious, actually much better than the meat itself which officially came later in the meal.

Apologies for the photo, it's not the best... I was trying the new iPhone 5 camera... 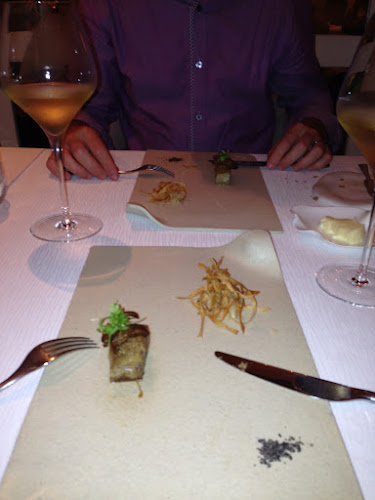 A Mediterranean inspired dish, the best tomatoes I have ever tried (at least in Sg), a fantastic risotto, a melon sorbetand some sashimi.

So tasty and looking so fabulous! 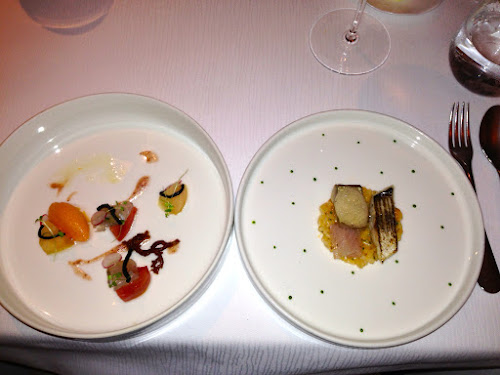 I'm sure this was this dish but I'm not really sure why... The textures weren't that weird or exceptional. It was anyway very tasty and so delicate.

Lobster, truffle, gnocchi (ok, that might be the texture thing, there were very unusual gnocchies) and apparently some scallop emulsion (taste of scallop is difficult to identify when mixed up) 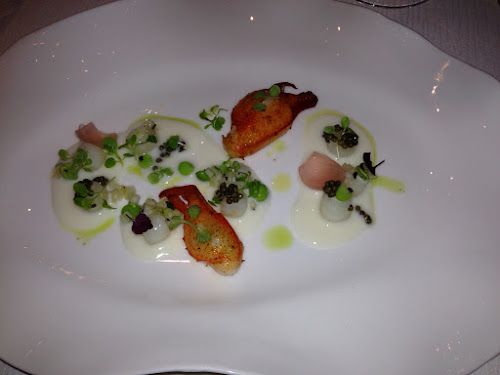 The signature dish of Andre, the foie gras soup/jelly (not sure what is the title)

As we say in French, "une tuerie"! A murder doesn't seem to be such a good translation...

Anyway, it was absolutely amazing! 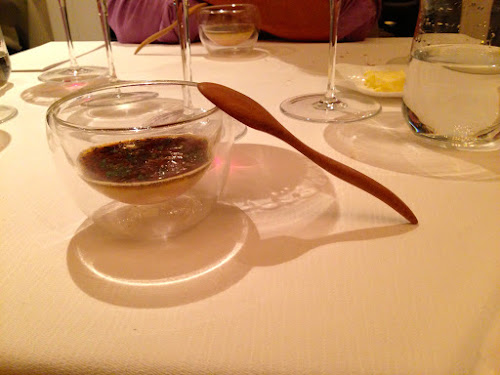 A rabbit dish, a bit of a disappointment to be honest, nothing that I really remember about it apart from the fact that I was pleasantly surprised of the original rabbit choice. 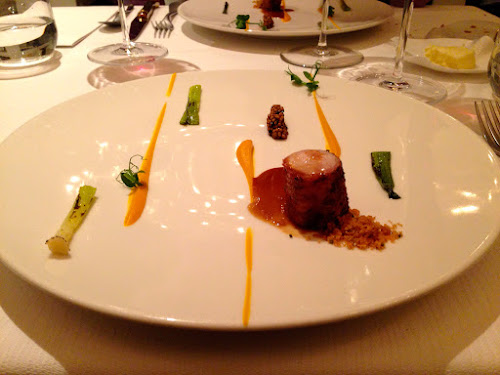 This is the last one and I'm now very confused, according to the photos I have , I'm left with the pre dessert which I liked but R didn't, a real texture mix with raspberry granite, dry and frozen raspberry and some powder of some sort. (3/4 eaten when I realized I was supposed to take a photo...) 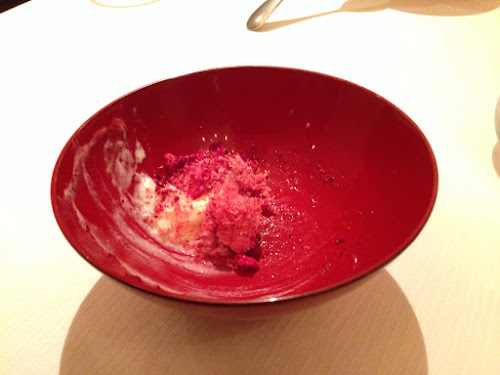 I also have the real dessert with a destructed/recomposed snicker bar and also a fish dish... 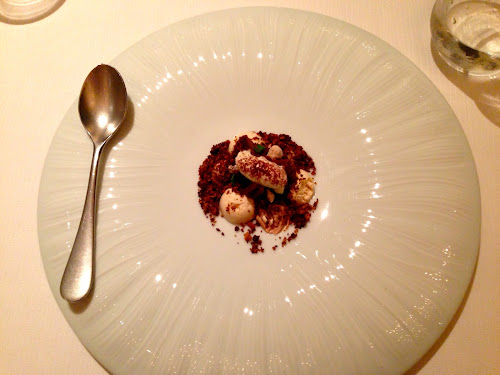 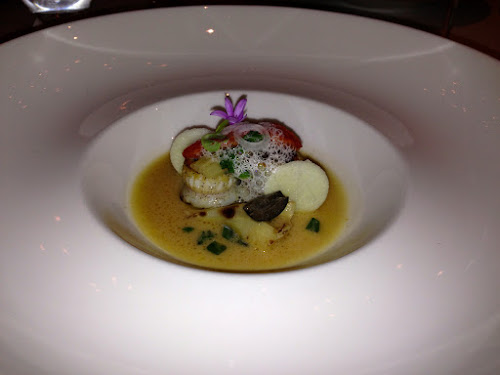 I obviously got confused somewhere...

Just to make sure I don't forget anything here are appetizers and mignardises which were to die for. In no particular order: mushroom flavored crisps, fish and chips!, popcorn, Madeleine etc 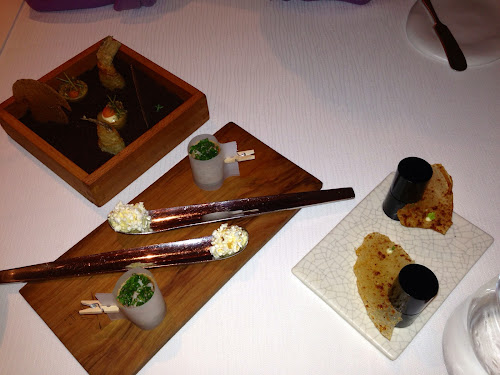 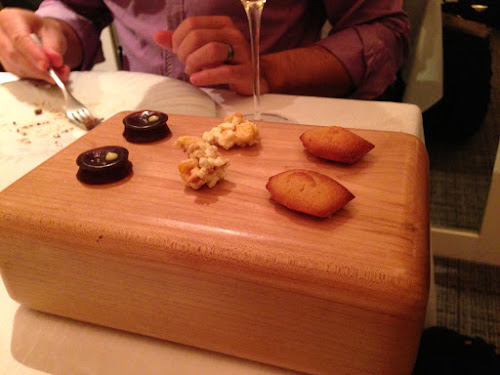 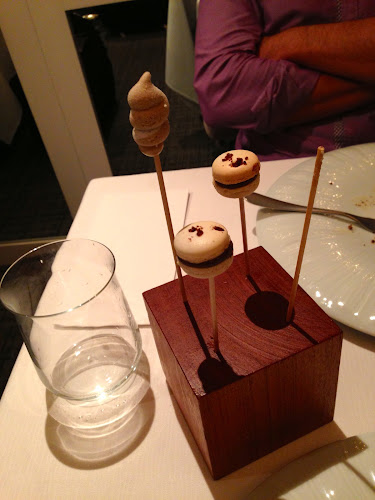 It was a fantastic meal, we did wish there was more red wine than white to go with all the dishes but apart from that, it was one of a kind!