There has been a break in the SE Asia traveling as we went back to Europe for 10 days.
A nice little tour including London pubs: 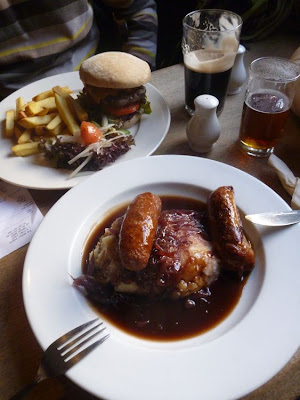 A poor start of the rabbit year for some rabbits (Borough Market, London bridge): 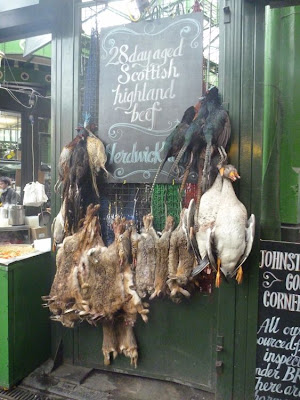 A fantastic exhibition at the Tate Modern (millions of hand painted ceramic sunflower seeds in the Turbine hall): 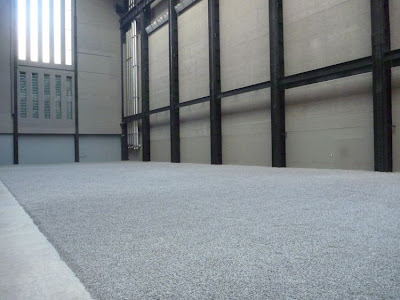 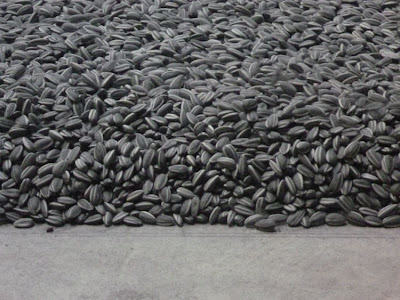 Then we passed Paris but we were too busy eating drinking and catching up with friends to take photos...

And finally skiing in Switzerland, including some mountains without snow, some with snow, colourful bears climbing cranes and a parma ham (comfort food after hours on the slopes!) 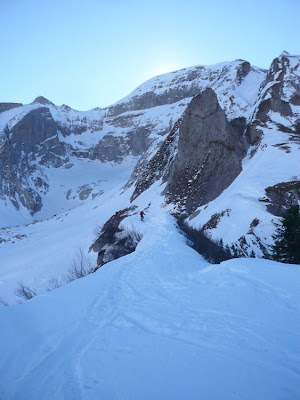 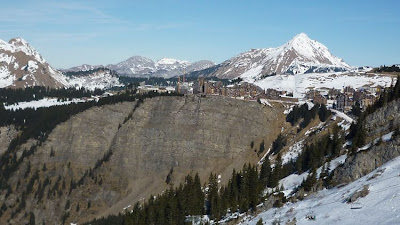 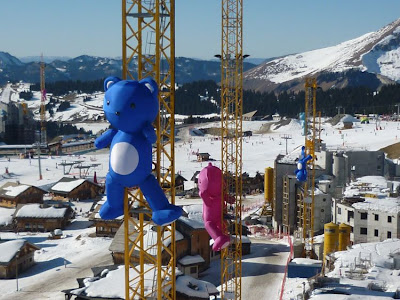 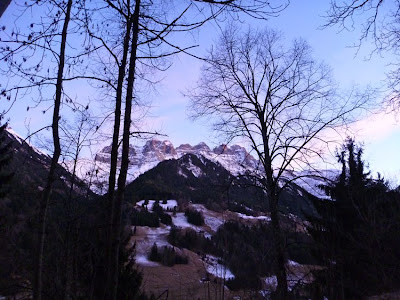 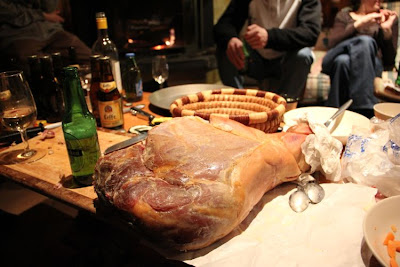 I'm now nearly up to date with the blog (1 more missing article on the Philippines) but no worries more will be coming, we are off to Sumatra next WE!
Posted by M. at 9:28 AM No comments:

Boracay and Ati-Atihan in Kalibo

This is before finishing the first article on the Phillippines that I start this second one.
We are keeping an eye on a list of 25 things to do in SE Asia and the Ati-Atihan festival of Kalibo was one of them! 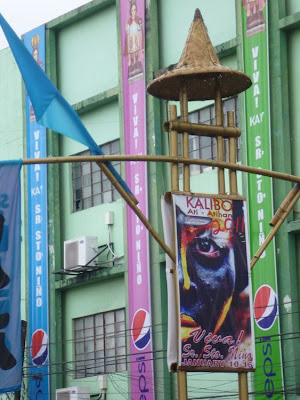 So several months in advance we had booked our WE. As Kalibo is close to the world famous Boracay we decided to cover both in 3 days.
As usual when you fly to the Philippines, the flights are over night so after 2 flights and 4 very painful hours in a plane (with a sinus at a different pressure than the rest of my head), we make it to Boracay. The airport is on a different island but it takes 15 minutes to get to the hotel, beautiful!
On Boracay island, the sand is white, the sea is transparent, life is really hard....

In order to clear my sinus (and to have a look at the local sea life), we go for a morning dive. The rest of the day is spent walking on the beach, sleeping, eating, jumping in the waves and gathering information about kite surfing possibilities. We still want to get on the board at some point! 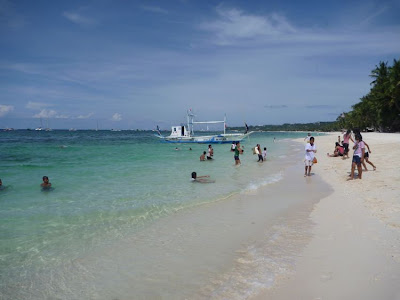 Unfortunately, the wind doesn't want to come, so on Saturday, we switch our kite surfing plans for jet skiing. We had never done that before and it was really coooool!
Like quad biking, it is much better when you are driving than when you are at the back! (or may be I'm just a better pilot than R... ;-)
We enjoy a beautiful seafood BBQ on the beach and an early night of sleep as we are leaving early for Kalibo on sunday morning.
It is not looking too good on the morning: the heavy rain doesn't want to calm down but we still press on. We even take a local bus for 90 minutes ride to Kalibo. That was interesting.... Apparently my femur is way too long to fit between seats and when you think 3 people is a bit of a squeeze at the back of a car, try 4! Apart from that, it was a pretty good ride.
We get dropped in the middle of town and straight away we bump into the first tribe! 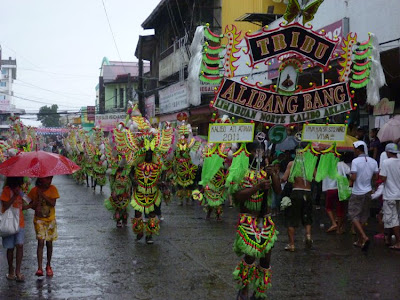 I'll try describing the general idea of the festival even if it's far from easy. It's officially Jesus's week, but Jesus is a child in this story, not a baby or an adult as usual but a toddler. So, a tiny statue of Jesus child is taken out of the church for a walk in the streets: 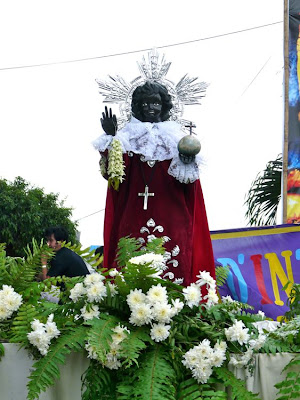 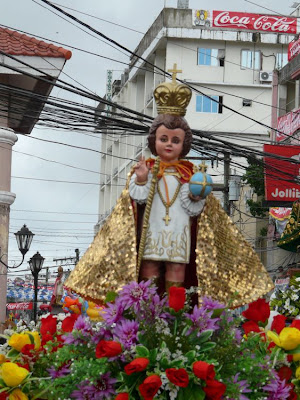 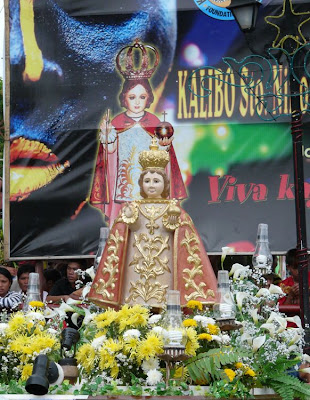 it also include a lot of tribal music and outfits: 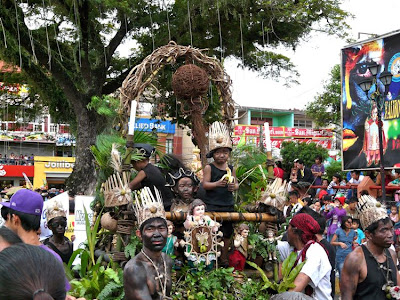 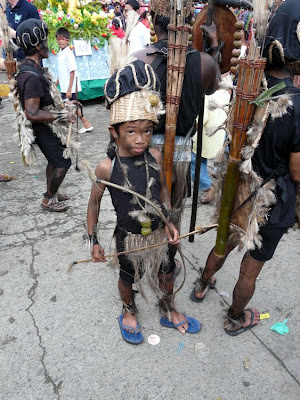 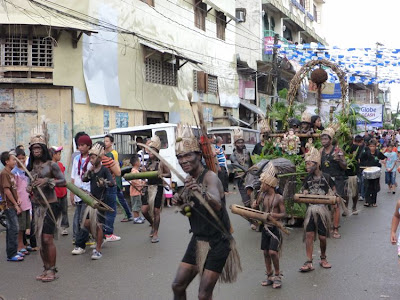 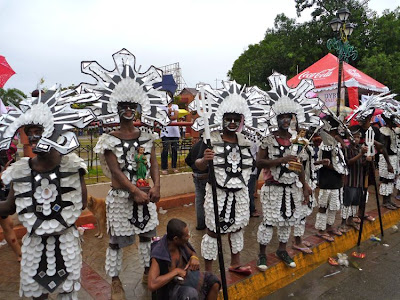 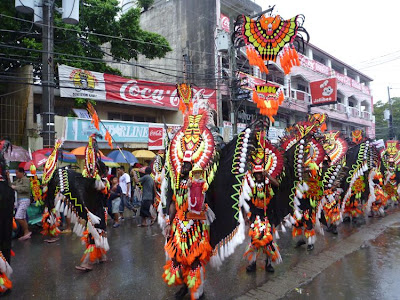 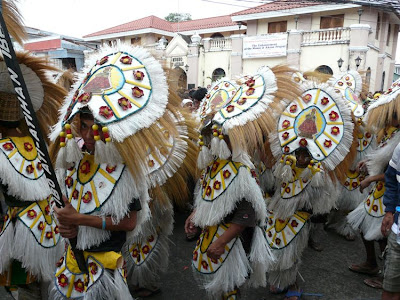 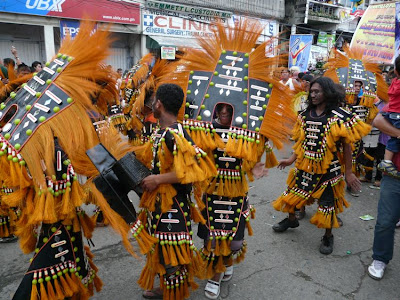 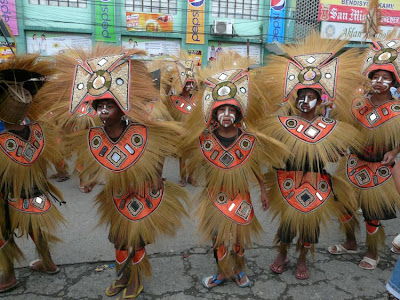 and that's for the live experience: 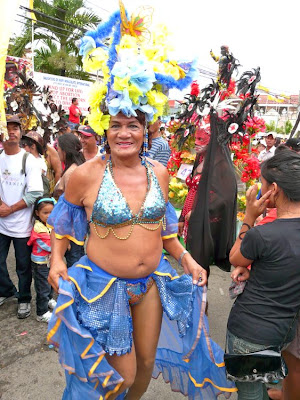 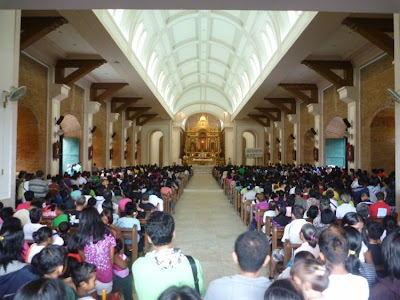 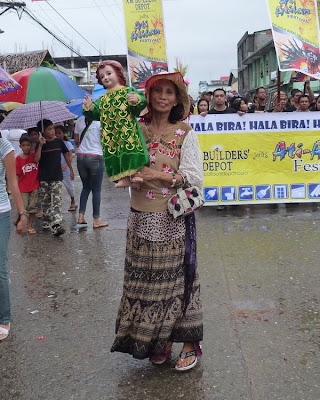 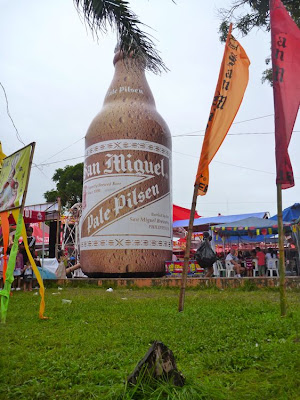 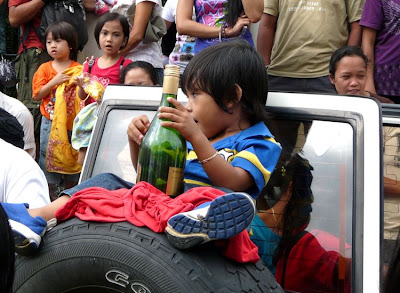 The way back to Sg was very smooth, despite a very complicated flight schedule, we even managed to watch Lara croft on the airport TV to catch up with the Angkor temples! In conclusion, the festival is really worth it but I'm also very glad I couldn't find a hotel in Kalibo and was FORCED (yes yes!) to stay in Boracay because apart from the festival, the town has really nothing to offer...

Oh, just a last photo, after all the drinking, the tribes, the transvestites, here is what you could read in front of the church: 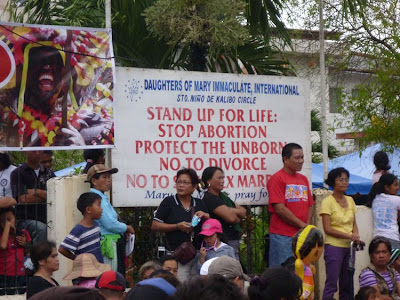