I have been wanting to write this post for a while and it just happened that the subject of this month's photo was matching (somehow!)
During a rainy WE, R and I visited the Singapore art museum. Singapore is definitely not famous for its museum but we actually walked on a pretty interesting exhibition and got a private tour at the same time. (The lady was really bored, she was desperate for visitors!). It was "the weight of history" and each artist had its own interpretation, sometimes it was about recycling and reusing objects, sometimes about creating something new with old broken pieces or my favorite, the evolution of an object across time. 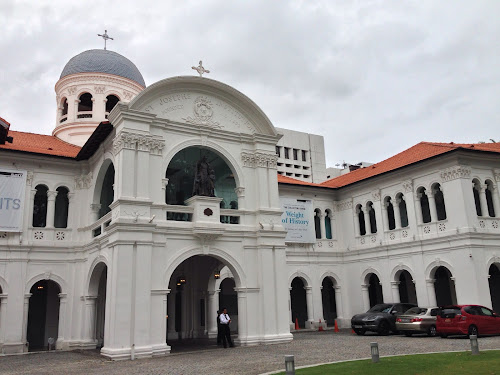 I had to chose one photo for this month's photo group so that's my choice: 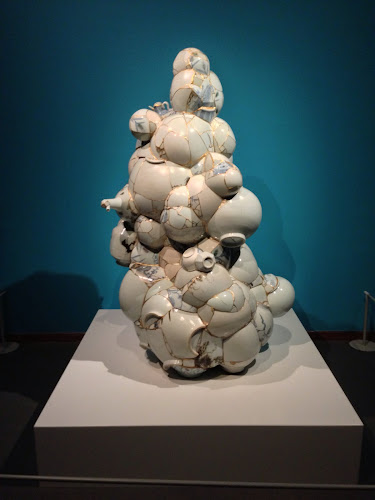 But here are the other ones 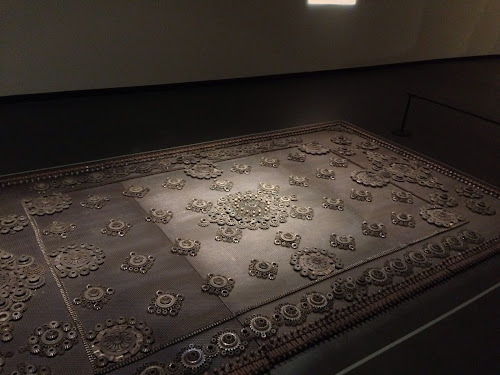 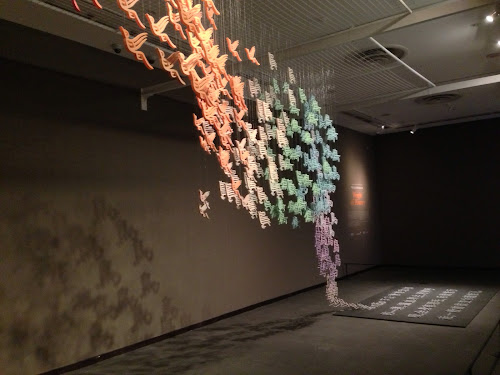 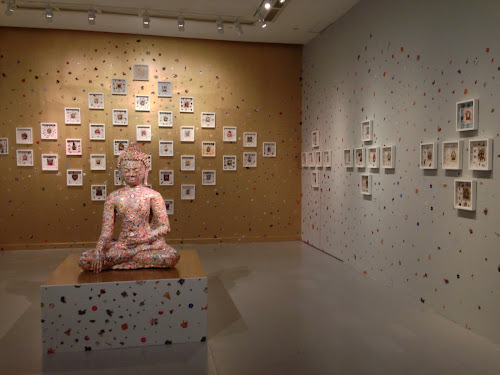 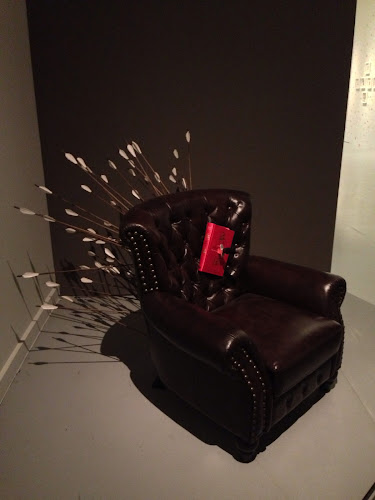 4000 islands and the temple of Champasak

After having flown from Luang Prabang down to Pakse, we took a bus (hmm a truck might be a more appropriate word...) for a 3h ride down to the 4000 islands, a suite of many islands (4000 only in dry season if you count all sand bars!) on the Mekong at the Cambodian border.
There are 3 main islands for tourists to choose from, the very quiet (Don Khong), the very party (Don Det) and the middle ground one (Don Khon). Initial idea was to go to Don  Khon but the boat driver did not seem to agree so we went for the party island! To be honest, that was probably a wise choice, Lao was so quiet at this time of the year that Don Det was really fine, at least we found a few bars and restaurants opened!
We booked ourselves in the first hotel we found, owned by a drunk looking Russian man (no stereotype there...) and proceeded to enjoy sunset on the Mekong with a drink. 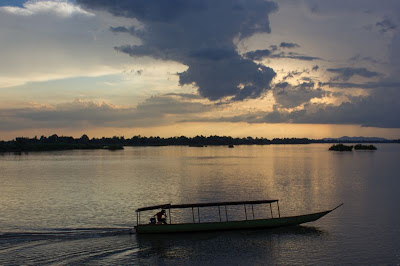 Next day, we rented bikes (no motorbike this time) and we went on an exploration trip, it goes without saying that there were a few waterfalls, it's Lao after all! If I'm really honest there were more rapids than waterfalls but not the type I'd like to do in a raft! 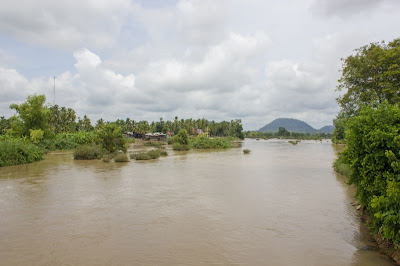 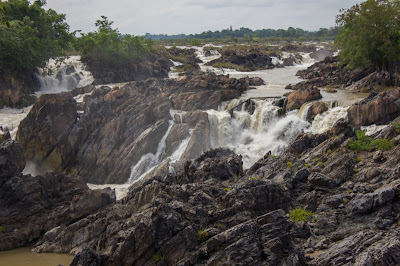 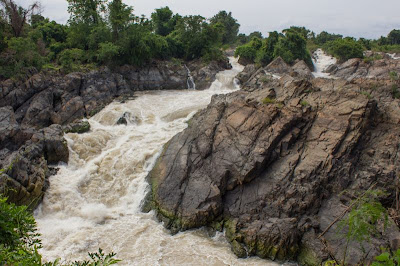 R did go for a swim but the current was incredibly strong, to give you a feeling for it, there was even a safety rope! (In Asia you very rarely see anything about safety, that must be a sign of a lot of previous accidents)
On this tiny little beach where about 5m2 were allowed for swimming we met another French guy (playing chess, just for info...) who introduced himself as being from Morteau, like the sausage! (Special thought for B)
Despite how many times I have eaten and heard about the Morteau sausage, I still don't know where is Morteau and I was too ashamed to ask the guy...
Just in case anyone is interested, here's a map 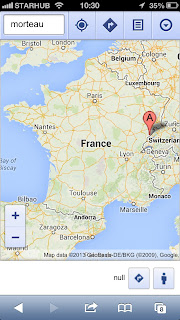 Moving on swiftly, we explored the island where we originally wanted to stay and agreed that it was fine for the day, watching buffaloes, enjoying the rice paddies and the views of the Mekong but we had probably made the right choice to stay on party island for the night life! (By night life I mean 3 restaurants and 4 bars with most of them selling magic something...) 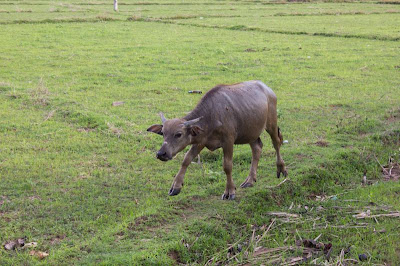 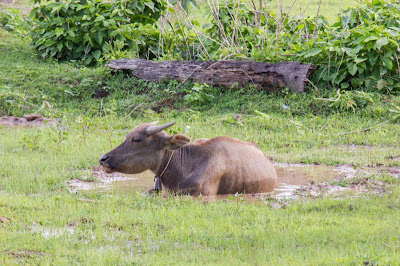 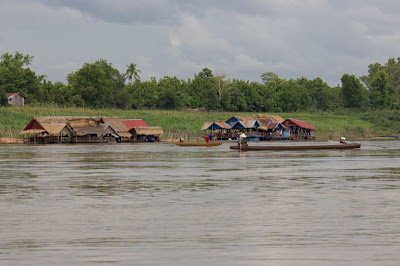 Dinner on that same evening was marked by the discovery of the rubbish collection system: put your trash in a big bin bag, tie it well, throw into the Mekong, when it crosses the border to Cambodia, this is not your problem anymore!
I did not ask about recycling...
Next move was to go to Wat Phu Champasak, for that we just needed to make our way back to dry land and then catch a bus, at least that's what we thought!
We had managed to be the only ones who bought tickets for a different bus company which was not leaving from the central point, we ended up randomly stopping mini bus in the street to find ours (lucky us, I think it was the 2nd one!)
And then after a couple of hours drive, he dropped us in the middle of nowhere saying that we had to walk 1 km to take a boat, arguing did not change anything so we went. A good 4km later with our big bags and under midday sun, we made it to a remote village with a ferry crossing of the Mekong. Obviously the ferry which costs nothing crosses once a day, for tourists, it's a private boat! A private boat which drops you exactly on the other side of the river, still 2km from the village, my patience was starting to run thin... 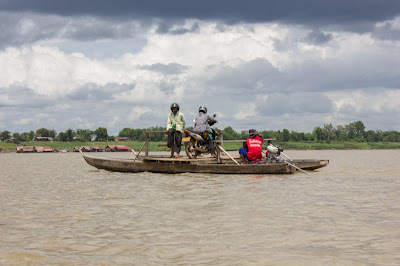 Luckily a real good hostel owner had probably realised that offering free tuk tuk from the boat to the village was a good way of getting business, and I fully supported his initiative! That was by far the cheapest night if the holidays, 10$ for 2 people breakfast included! (I also had to use my silk sleeping bag for the first time as I couldn't risk touching anything...) I fell asleep watching 4 gekkos having a fight on the ceiling and hoping the fat one wouldn't be overcome by gravity and fall on me...
The night actually went peacefully and we were ready to explore the temple the morning after. It's mostly destroyed, it's full of tiger mosquitoes but it's actually rather beautiful and quiet. A bit the same feeling as in Angkor with a fraction of the tourist population! 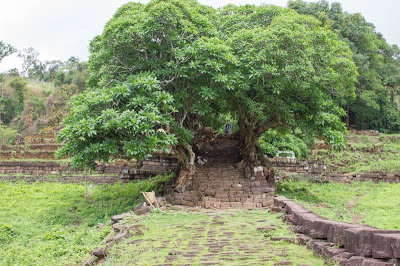 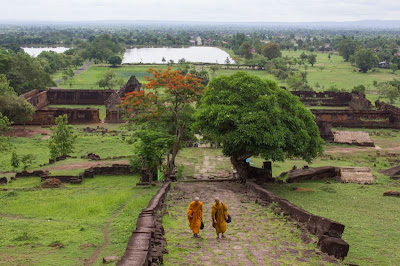 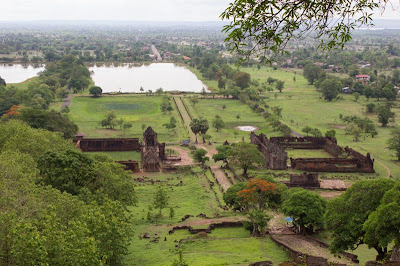 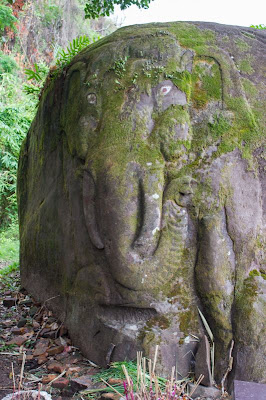 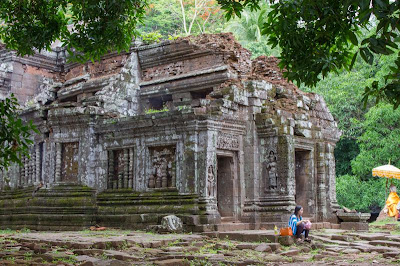 This same afternoon, we made our way, uneventfully, back to Pakse bus station (3rd time in 5 days, even the noodle soup lady knew us by that point!) to continue our holidays towards the Bolaven plateau.
Posted by M. at 5:04 AM No comments: