(first I would like to say that I am not aware of a follow up to the film "Good morning Vietnam", let's leave that to Rambo and Terminator!)
Before you think I'm obsessed by this film, here are a few things about 2 days in Ho Chi Minh City:
It is a little bit strange to have a city named after a person (I don't know if there are other occurrences), it's like if London was called Churchill city or Paris named De Gaulle city! (Thinking about it, there is already the airport...) Anyway, the locals haven't abandonned the old name of Saigon!
1h20 minutes flight from Singapore, absolutely perfect! I think it took longer to B to come from north Vietnam!
Just landed and we start having problems with taxi drivers (that will become the theme of the next 2 days!) We take a metered taxi at the airport, he knows where is the hotel, he explains in a decent English that we have to pay the airport fee, that's all very good. 5 minutes later, he tells us that he has to stop because one of his light is not working and he is going to call us another cab. To be honest, that was already suspicious because seeing how they drive, not having a light should be right at the bottom if their list of concerns! Anyway the other taxi arrives so we decide to get on with the flow and ask the taxi driver how much we own him. He says 560,000 dong, equivalent of 28US$!!! for 5 minutes! Then he gets a ticket out saying that the airport fee was already 300,000. This is unbelievable! I check his meter and I can't see anything but I know that it should read 56,000 and not 560,000. It looks like the coma has been misplaced, so the price has increased by a factor of 10!
A quick call to the hotel confirms that the airport fee should be 10,000 and that the fare to the hotel is about 150,000 and as we have done a third it should be 50,000. This is the confirmation of the factor of 10 suspicion I had. As I'm way too nice, I still give him 50,000 dong and now I really regret not taking his fake receipt away from him! 2nd driver was very good, good meter and normal price!
Before starting the exploration of HCMC, we decide to escape the city. We are on our way to CuChi, 60 km north of Saigon, famous for the 250 km of tunnels the Vietcong dig during the war: A way of attacking the Americans by surprise and disappearing really quickly. It's our first insight in this war, it's barbaric, it's cheap and nasty. There are traps, sticks and other horrible surprises. 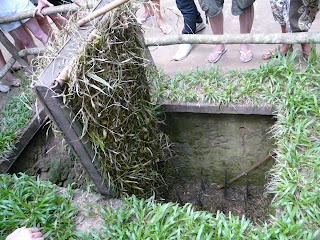 Tourists also get to try some of the big guns, including the AK 47! (I'm just pretending here...) 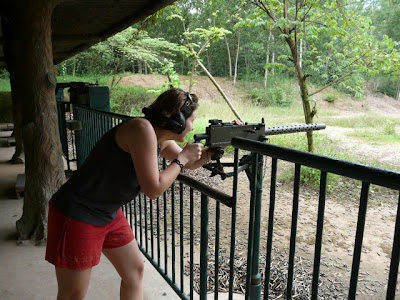 We only go in the tunnels for may be a 100m, and it's a special tunnel for westerners as apparently our shoulders wouldn't have fit in the real tunnel! (Estimation of new tunnel dimension: 1m height, 50 cm wide). Despite this enlargement, it's small, it's hot and I'm glad to get out. People could live in them for up to 3 months! There was food, water, ventilation, it was very well thought through.
And here is a very nice tourist demonstrating that not everyone can fit in the entrance door... 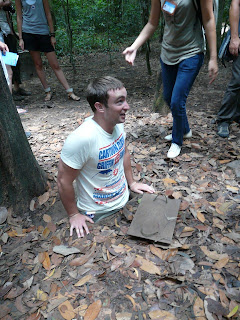 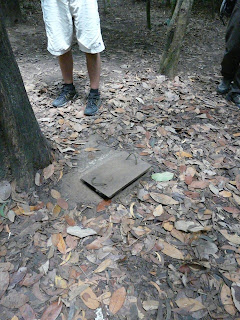 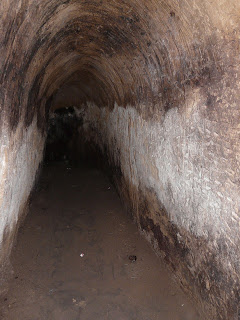 Back in town, we continue on our learning curve about the Vietnam war by going to the war museum. On top of the photos and stories inside, there are all the tanks/planes/helicopters left by the Americans in the garden. 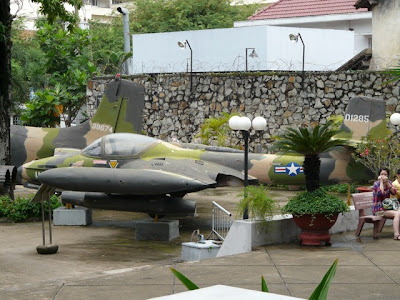 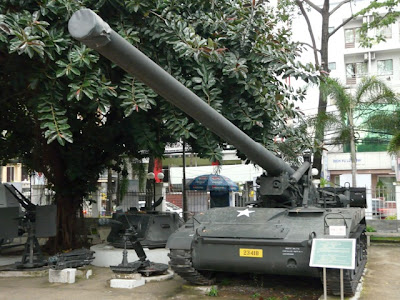 The way back to the hotel is entertaining, we don't have a map, we don't remember the street name, our hotel is called best Saigon hotel (like all the other hotels), all we remember is the name of the bar next door and that seems to help the driver! This one is a fake taxi as well, the meters goes really quickly this time.
At night, we go for a cocktail at the top of a famous hotel from where we can admire  the old french colonial architecture and on the morning we find ourselves in front of the new type of architecture, communist... 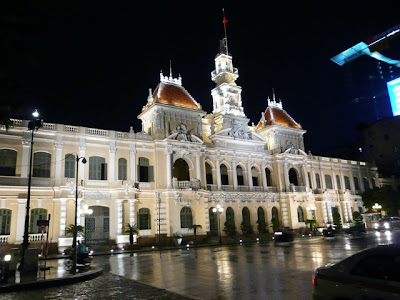 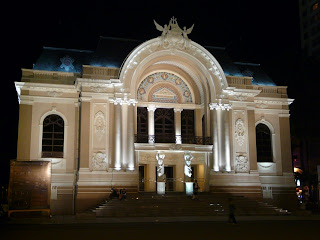 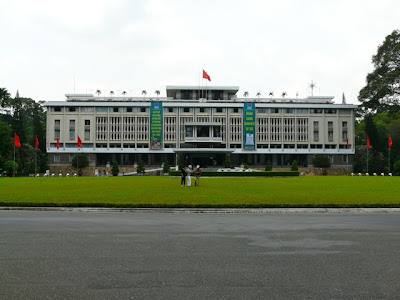 Sunday morning, it's time for a little bit of shopping, we join the locals at the market for some springrolls and sugar cane juice and we walk the stalls, admiring the different fruits, flowers, crabs, meat and herbs (the ones for the pho, the Vietnamese soup) arrangements. Note the huge ice bricks behind the herbs! 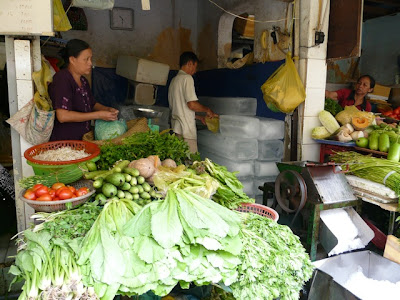 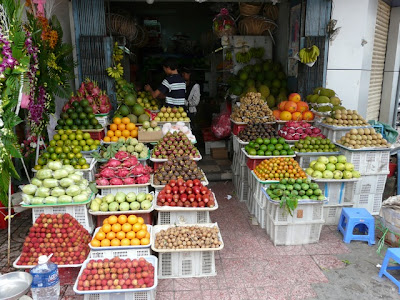 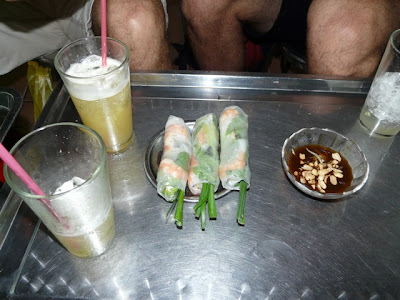 Once B has found a moto taxi to go back to the airport, we carry on walking around town. We discover the famous post-office with a big painting of Uncle Ho (Chi Minh) and spend some time in a crowded Buddhist temple. We discovered a day later that it was the ghost festival when people burn item to pass them on to the dead. The smoke/smell from the incense is so strong that eyes get really watery. 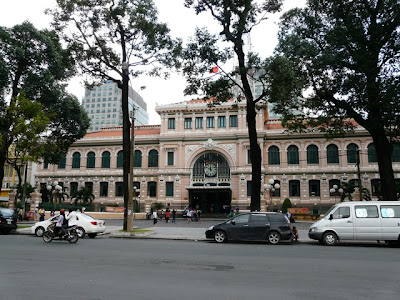 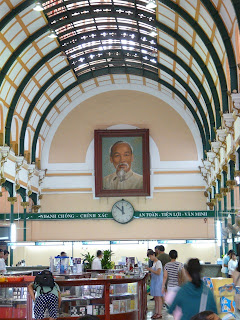 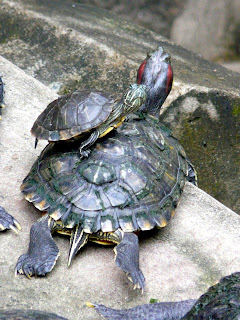 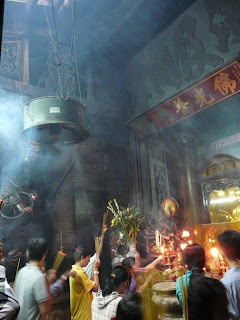 That was a very nice and quick visit to HCMC. One more trip to Vietnam to tell you about, that will be a mix of Hanoi and Sapa.

Tip from this WE:
In Thailand keep on looking for a cab who want to switch the meter on
In Vietnam, the meter is fake anyway, negotiate first!

15th of September, once again it's this month's photo day.


The theme today is ''promenons nous dans les bois', in english, it's the equivalent of "let's go for a walk in the forest" (I'm sorry it is really not a pretty translation...)
Anyway, like many french people I suppose it's hard not to start singing a song when you read this sentence, it's the beginning of a kids song:
Promenons nous dans les bois
Pendant que le loup n'y est pas (when the wolf is not around)
As I didn't meet a wolf anywhere recently I decided to stick to the theme of the forest! So I took this photo of 3 beautiful girls in Vietnam during a walk around Sapa. We were heading toward a Hmong village where we had a fantastic lunch with one of the girls (the one on the right) family.
All of them are wearing the traditional costume of their tribe with a very strange comb stuck in their hair! (you might need to zoom in...) 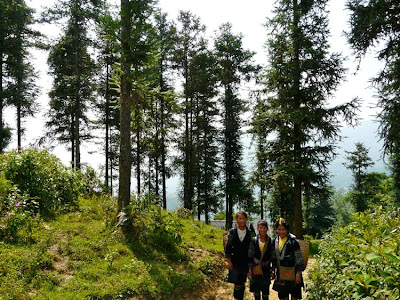 Isn't beer the first word we learn in a foreign language?
Vietnam offers a great choice and R made it a mission to try them all! (ok fine, I'll take part of the blame too, and B should take some as well!)
A lot of them carry the name of the town they are from, otherwise, the name is easy enough to remember. Here is the collection:
From the north (town of Hanoi and Laocai): 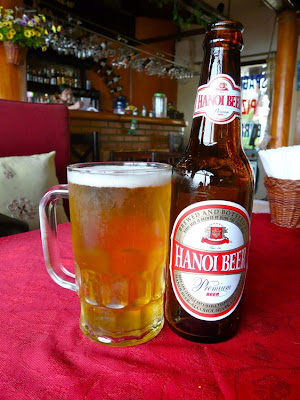 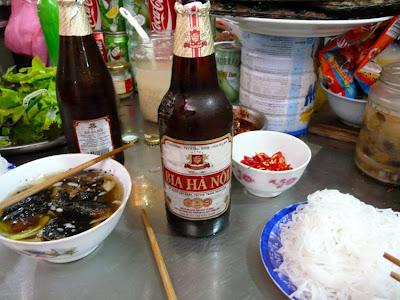 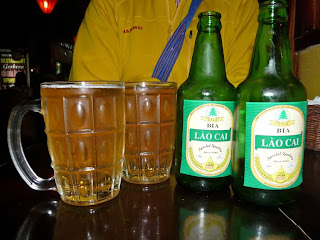 From the south (city of Saigon) 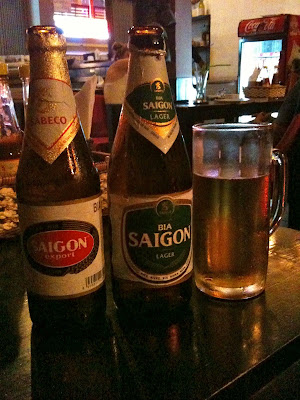 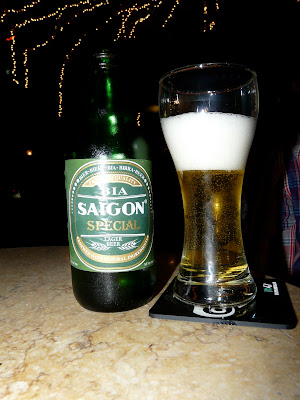 Easy names:
BaBaBa (at least now we know how to say three in Vietnamese!) 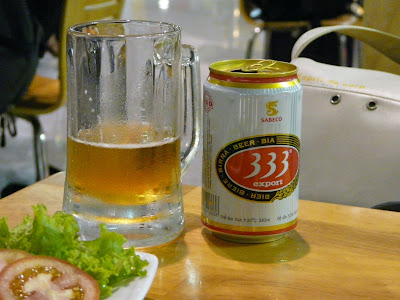 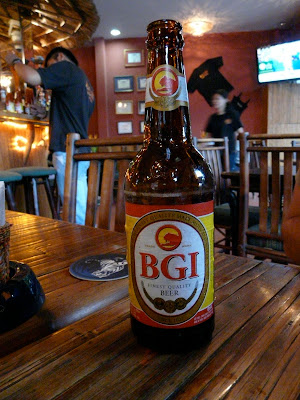 And Kuda, famously served with an icecube :-) 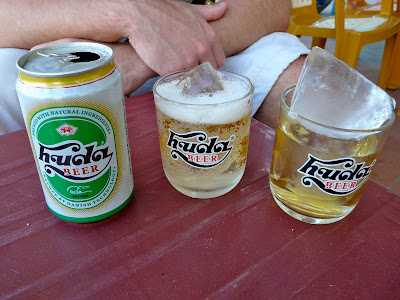