This month's photo: To the end of the world

15th of November, time for this month's photo!
The theme today is "Au bout du monde" which translates in English to something like:"To the end of the world"
I admit straight away, I haven't thought about it too much by massive lack of time. By consequences, I have failed to follow my internal rule which is to take the photo during the same month as it gets published.
The photo was taken on the 90 miles beach, on the North island of New Zealand and here are a couple of reasons why it links to the theme:
1. This blog is based on Paris time and New zealand is probably as far as it gets from France, so it is then end of the world...
2. This beach is so long that it could take you wherever is the end of your world between little white clouds and waves
Theses deserted new zealand beaches never failed to let me lost in my dreams. 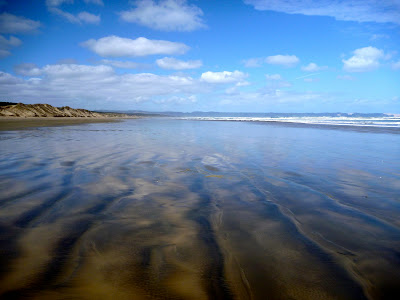