Good morning Vietnam: from Hoi an and Hue

Before getting on with the events of this long 4 days week-end, I want to come back to the title of this post. It's a reference to the 1987 film "Good morning Vietnam" which tells the story of a DJ in the American army during the Vietnam war, who started all his programs by "Good morning Vietnam!" I have been trying to find out if the famous American day show "Good morning America" got its name from it or vice versa and the date of creation of GMA (1975) leads me to think that GMV was a reference to GMA!
Now that we are clear on that (ok, I know that I may have been the only one interested), let's talk about the trip!
4 days WE due to Singapore national day falling on a Tuesday. B has recently arrived in Vietnam so it was time to make good use of our multi entry visa.
1st stop is Hoi an, right in the middle of the country; actually only accessible through Da Nang airport 30km north.

We arrive around lunch time on Saturday and it's hot! Well into the 40+ degrees! The city centre is small but really pretty and there are tourists everywhere! While waiting for B who is arriving by train from Hanoi, we walk around town a bit and find this wonderful sign: (in case you can't read it, it says: "Walking street: primitive vehicle only') , next thing we see is a primitive truck! :-) 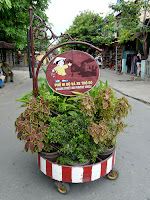 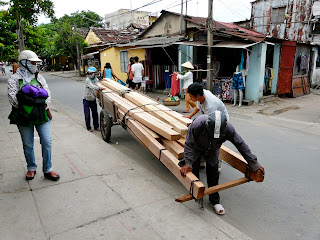 Once B found, we sit at a little terrace for lunch. Food in Vietnam is fantastic, no wonders the French decided to colonialise this country out of all SE Asia! (this is a joke by the way! but I'm preparing another post about all the link between France and Vietnam)
The afternoon is spent walking around town, admiring the landscape, getting massages and drinking plenty of fluids to stay well hydrated ;-)
The photos take you first to the Japanese bridge which has a temple in the middle, then to street activities: selling food, selling Tintin poster (not sure if that's french influence but they are everywhere!) and finally the beautiful temples which are all around town. It was nearly the time of the ghost festival where the buddhists burn items that the dead might be needing (see glasses, comb etc) 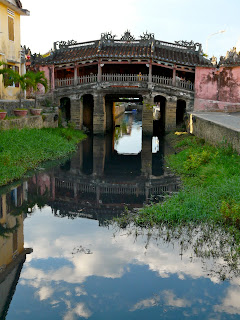 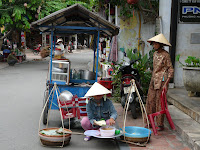 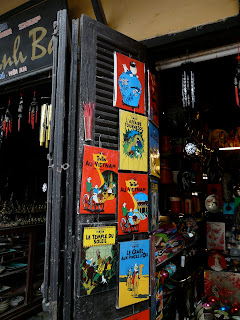 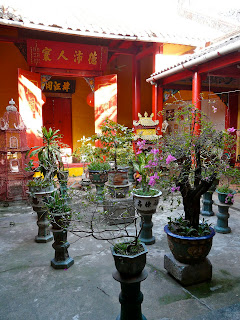 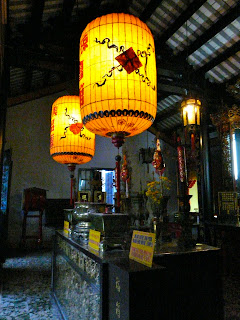 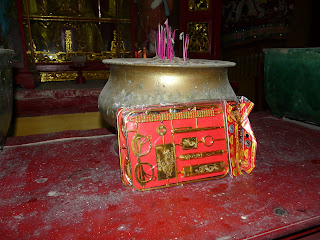 Before going for dinner, we can admire the Vietnamese transport system on the river at sunset. Do you think this boat could be overcrowded???? 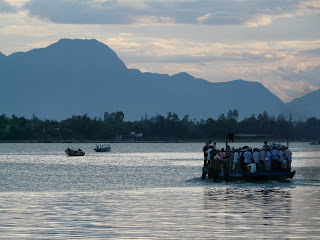 Sunday morning, after a wonderful breakfast at our hotel where we got a chance to admire spinach cutting in the field below,  we are off to My Son, temples ruins reminding us of Angkor but a LOT smaller! 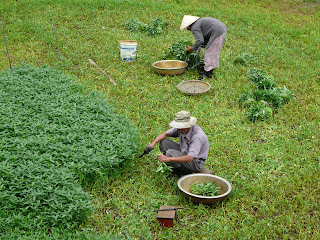 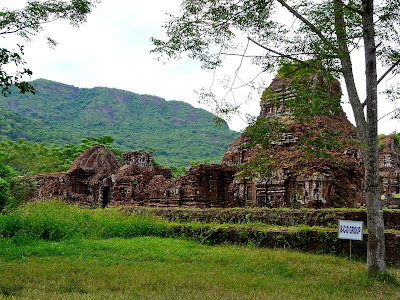 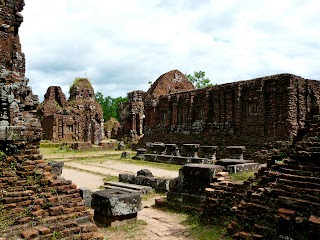 I get kidnapped for a photo shoot by the Vietnamese army and none of my 2 men came to save me!!! 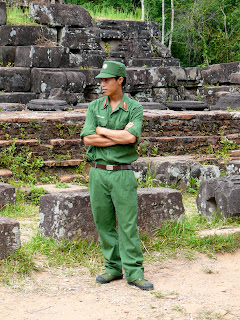 Later on in the afternoon, after having found an easy-rider for B to go back to the airport (motorbike taxi which ended up being a scooter driven by an old man), we headed to the beach. What a hard day............. 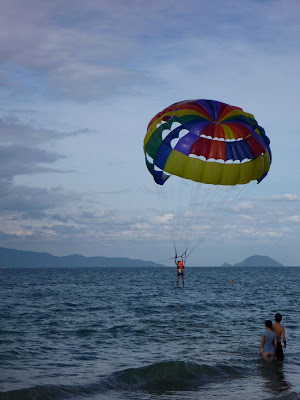 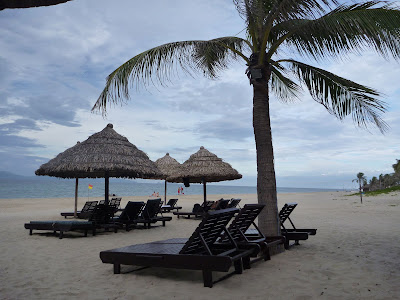 3rd day is a travel day, first a taxi to DaNang, then 3h train ride to Hue followed by a rickshaw to the hotel. I instantly regret not to have booked a hotel with swimming pool as once again, we are roasting! During this first afternoon in the imperial city we go to the Market (where we resist the urge of buying 1.5T of rice), visit the old merchants part of town and get to drink beer with ice cubes as fridge don't seem to be commun in bars... 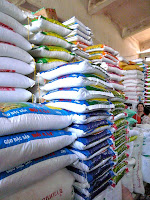 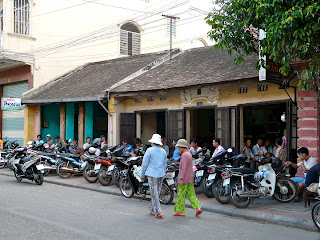 Being French is actually very similar to being Vietnamese, I have already mentioned good food, now it's time for bicycle. Despite the apparent craziness of the traffic, we rented bicycles. (Hue is much bigger than Hoi an and walking everywhere is not an option!) To our surprise, cycling in Vietnam is not that difficult! Everyone is aware of the lack of organisation so the approach to junction is taken very carefully and very slowly. Our bikes take us to the citadel which contains the palace which contains the purple forbidden city. It's actually quite similar to Beijing, just smaller and quite damaged by the bombings during the wars. Note the huge Vietnamese flag (ex Vietcong flag) floating over the citadel. Hue is not far from the old border with North Vietnam so it was one of the first city to fall to the communists during the war. (more on the Vietnam war in the HCMC post) 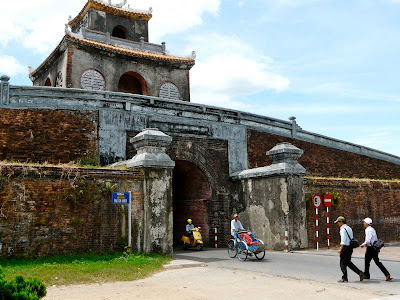 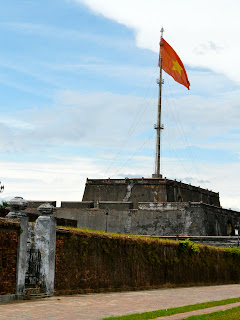 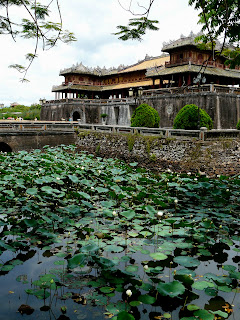 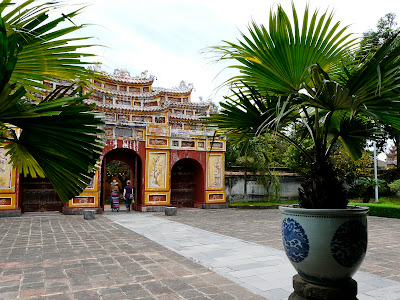 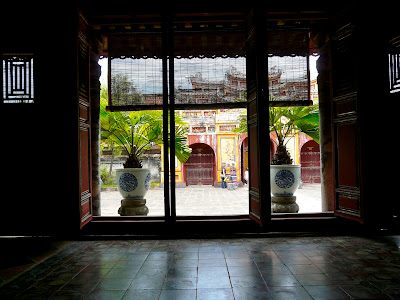 In the ground of the citadel, we meet this lovely animal and her friend: 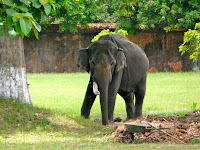 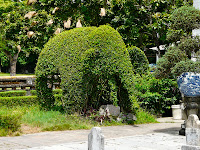 The rest of the day is spent looking at ex-colonial buildings connected by incredibly wide avenues with no trees (I have baptised them the communist roads), which you can imagine are a problem when the sun is burning!! Then it's time to fly back home, but no worries, we'll be back to Vietnam in 3 days!